Sorting out the city

Posted on October 1, 2010 by Parisian Fields

The organization of Paris into its 20 arrondissements, spiralling out from the Ile de la Cité, seems so well established that you may be surprised to learn that the arrangement is only 150 years old. Today’s arrondissements date from exactly January 1, 1860.

On that day, the city was restructured and 11 surrounding villages or communes were annexed: Auteuil, Passy, Les Batignolles, Montmartre, La Chapelle, La Villette, Belleville, Charonne, Bercy, Vaugirard, and Grenelle, along with some bits and pieces of territory that fell within the Enceinte de Thiers.

Today, some of these areas retain faint traces of their bucolic past –a few winding roads, some country houses now hemmed in by urban development, glimpses of trees that were once part of orchards and are now marooned in courtyards. But in 1860, they instantly became “urban” and had to leave behind their rural roots.

If you want to understand more about this watershed in Paris’s history, go to an exhibit called “1860: Agrandir Paris: 150 ans des vingt arrondissements parisiens” at the Galerie des Bibliothèques, 22 rue Malher, 4th arrondissement (2 September to 24 October, 2010), which commemorates the reorganization and annexation of 1860. 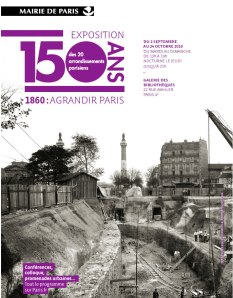 And if you can’t visit the exposition, the section of the City of Paris website devoted to this topic is well worth a visit. Among other features, it offers downloadable walking tours that start in the city and head out into the banlieues – what urbanists would call a “transect walk” that provides a sense of how former suburbs have been absorbed into the city and become urbanized and suggests how current suburbs may evolve over time.

The 150th anniversary has also prompted a series of talks at local libraries and mairies as well as sites such as l’Arsenal and le Petit Palais that highlight some of the political and social effects of this dramatic alteration in the shape and organization of the city.

All of this made me wonder how the city had been organized in the past.

In the Middle Ages, the city was divided up into quartiers named for local churches – in other words, parishes (paroisses). The Atlas de Paris (Parigramme, 1999) shows 21 parishes in the central city in the 13th century. Some have familiar names (St Eustache, St Sulpice) and some are named for churches that have long since disappeared (Saint Benoit-le-Bétourné, Saint-Jean-en-Grève).

A few old parish names survive into the present as Paris districts, such as St- Germain l’Auxerrois, St-Merri, and St-Gervais.

In 1790, the Revolutionary government that tried to establish 10-day weeks (big mistake) and rename the months with names like Floréal and Messidor, also imposed a new order on the city – 12 arrondissements (or municipalités), each one divided into four sections, some with militantly Republican names, such as l’Unité, Fraternité, Fidelité, l’Indivisibilité, Contrat Social, Droits de l’Homme, les Amis de la Patrie, and even – I kid you not – Brutus. 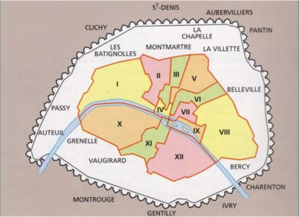 Finally, in 1860, the Emperor Napoleon III and his prefect Haussmann created the arrangement we know today. They retained the system of dividing each arrondissement into four quartiers, but abandoned the Republican names in favour of more traditional appellations (goodbye Brutus, hello Sentier).

The way in which we define and name neighbourhoods is not just a matter of administrative convenience, because it becomes part of the identity of people who inhabit that neighbourhood. Paris’s parishes, sections, and quartiers are integral to the lives of their residents. But behind the numbered arrondissements lies a history of parish saints, republican virtues, and vigorous attempts to impose order and rigor on an ever-evolving city.

Parisian Fields is the blog of two Toronto writers who love Paris. When we can't be there, we can write about it. We're interested in everything from its history and architecture to its graffiti and street furniture. We welcome comments, suggestions, corrections, and musings from all readers.
View all posts by Parisian Fields →
This entry was posted in Paris arrondissements, Paris walls and tagged arrondissements, banlieues, Baron Haussmann, French Revolution, Mur des Fermiers-Generaux, Paris parishes, Paris villages. Bookmark the permalink.

3 Responses to Sorting out the city